Today’s story of gravestone conservation is actually about a pair of gravestones that we repaired simultaneously, as is only befitting of young sisters. These marble markers, in Section K beside the crematory, were both transported over from St. Paul’s Cathedral churchyard. The sisters, Margret Matilda and Caroline F., died in 1855 and 1859 at young ages. Their parents ordered large, ornate gravestones to commemorate these losses, and our story today details their uncovering and restoration…all 2 weeks of it!

Initially, we though that these stones were both part of the same monument, perhaps a large ledger that had cracked under the weight of years of lawnmowers driving over it. Once we removed the sod layers, however, it became apparent that it was actually two gravestones laid to rest side by side!

As you can see in this photo, there is a base to Caroline’s stone on the left, still sticking up out of the ground. This suggests to us that a) her gravestone was not the style that included a separate key, with the 1850s dates a good indication that neither of them had keys, and b) these stones were once erected directly beside one another, after were laid in the same location after they broke.

This was both an exciting realization and a troublesome one, because while it meant that we would be able to raise the stones without making new keys, it also meant a *lot* more excavation to remove the two bases of the stones, still buried in the ground. And yes, once we removed Margret’s stone and probed below, it was evident that the base of her stone was still in situ below the surface as well. It was our lucky day!

Excavating the bases of the gravestones.

Detail of the iconography on Cartherine’s grave, before cleaning.

Once the bases were excavated (which took ages) and the stones were cleaned, it was time to start digging out the ‘foundation area’ in order to reset the stones. We decided to go about this by digging down further than the gravestone bases were buried to, in order to pack the bottom with a level foundation of limestone screening. Once the limestone was in place and level, we made sure the bases were placed with the break just above ground level (for repairing) and packed limestone up to ground level to ensure they couldn’t budge out of place. Then…the difficult part began.

You might be thinking, what difficult part? Surely hauling massive pieces of marble out of the ground with little more than your bare hands was the difficult part? Not so, my friend, not so. Normally when we get to this part of a restoration case, it’s a simple job of spending an afternoon measuring and drilling holes into the stone with a masonry drill, inserting the dowels, and clamping support boards around the crack until the sealant sets. Unfortunately, these gravestones were not so agreeable and turned out to be the hardest marble ever! Our drill skipped, the batteries were eaten almost immediately, and we called over auxiliary help (Joey) to make sure the sun hadn’t weakened us and it was actually fine but no, no this was the toughest marble that any of us had ever seen!

In a day, we were driving to and from the mechanical/tools compound to charge batteries multiple times, although the masonry drill bit we were using looked fine. It was slow going, until Grant the crematory operator suggested we use his drill, which was typically used to remove metal casket handles before the caskets went into the retorts. It hadn’t been used much and was nearly new, and we happily took the shiny, blue power drill outside. From there on it was mostly smooth sailing, and we only had to recharge the drill about once a day!

It took 2 days to get that one pice mounted! 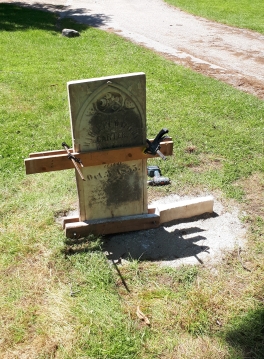 Finally got one up!

With the better drill, we were able to finally move a little quicker, but it did take a total of two weeks from start to finish to locate, uncover, clean, and reset these gravestones. This includes limestone pointing on the cracks after the dowels had set in place. Initially, we had attached the top corner of Caroline’s stone with just some adhesive, due to the small size of the piece, but unfortunately because of the state of the stone’s weathering the surface was sugaring. The adhesive stuck to the detached grains of the stone and the piece broke off again in the same place! Second attempt included a dowel and it reattached with some ease.

Once the final two cracks were repaired (Caroline’s stone took longer, as it was in 4 pieces rather than just 3), it was just a matter of removing the final braces, pointing the breaks to protect the interior and the dowels, and voila!

We are very happy with how these two gravestones turned out! After the Hugessen monument, this was absolutely the largest (or at least most time consuming) project we have undertaken this summer! The stones are beautifully preserved due to their time underground, with Margret’s stone depicting a rose in the centre with additional foliage around the edges, with a Gothic arch. Caroline’s stone depicts a woman mourning, a tree with a bird in the branches, and a small lamb curled below it.

Margret died when she was just about a year old, and her sister Caroline when she was just 6 years old. It’s clear that they were deeply missed by their parents, and it’s lovely to see that they can stand together even still, having been relocated from their original resting place to Woodland Cemetery.

Margret’s stone ends with a poem which reads:

‘Sleep on sweet babe and
take thy rest
God called three home, he
thought it best’

So often the poems on gravestones are difficult to read, due to the inscriptions being much shallower than the main body of the inscription, but these stones were partially covered, protecting the wonderful epitaphs. We think they are fitting tributes to these young girls.

As always, thank you for reading! We’re looking forward to bringing you more posts about Woodland’s history and restoration!

6 thoughts on “Buried together: The Carter Sisters”

*The cemetery grounds are open to visitors every day from dawn until dusk.